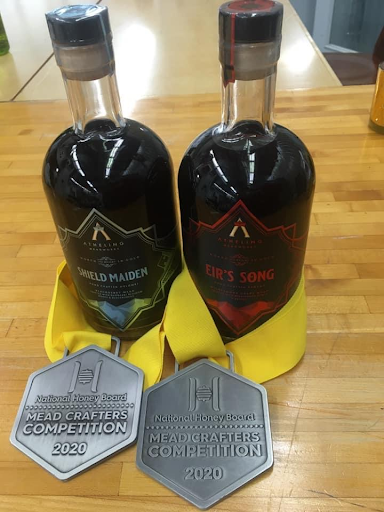 When Atheling Meadworks owner Stephen Ausband was young, his life was filled with fantasy, monsters, and stories for the ages. His father was a university English professor and would often read books aloud to his son, such as the tale of Beowulf. The idea of the king’s beautiful and mighty mead hall being saved from the maniacal monster piqued his interest, and that interest led him down a honey-sweetened path.

Ausband started experimenting with fermenting honey as a teenager. But it wasn’t the novelty of the alcohol that he was focused on, it was the science behind the process. That love of science eventually turned into a lifelong honey hobby and career in medicine. Ausband graduated from medical school and became an emergency room doctor and U.S. Air Force Reserve flight surgeon.

Now with a successful career in medicine, Ausband was ready to revisit his teenage hobby turned grown-up love affair with fermentation. His dream of opening a meadery finally came to fruition in 2019 when he opened a production facility and tasting room inside the former Dr. Pepper bottling plant in Roanoke, VA.Now that the building is home to Atheling, Roanokers and mead enthusiasts have the opportunity to find their next favorite beverage from the same location!

Mead (or “honey wine”) is created by fermenting honey and water. It is a sometimes sweet, sometimes dry alcoholic beverage that can range from about 3.5% ABV to more than 18% ABV. Fruits, spices, grains, and hops may be added to create a more complex flavor profile. When the honey arrives at Aethling, Ausband and his team put the pallets of liquid gold into a warming box, bringing the temperature up to mirror  the temperature inside a beehive so the honey is easier to work with. From there, the honey starts its journey to becoming part of Atheling’s line-up of small batch, high-quality meads.

The name Aetheling comes from an Old English term for a prince or lord in Anglo-Saxon England. With the attention to detail and the focus on the process, it’s clear that Stephen Ausband is the king of the castle at this meadery.

Our Best Seller: Shield Maiden, a melomel made with raspberry blossom honey and blackberry, then aged on oak. $28.80 / 750 mL, 18% alcohol